One of the things I love about travelling is running to explore. I have to admit I’ve not done as much of it as I would like – I didn’t really run when I visited exciting places like Havana & Mexico City – but now, one of the first things I do is pour over a map looking for good running routes!

I know Toronto reasonably well & until Brighton this year Toronto held my marathon PB from 2014. I’d run the marathon but had never really ‘run’ Toronto. I was excited to get out & see some of the city.

One week, five runs, 44 miles but only a tiny percentage of the city!

An easy four started my week to stretch my legs after the previous days eight hour flight. My brother lives in the Beaches & the only other time I’d stayed with him it was October, I was injured & Toronto was hit with the tail end of hurricane Sandy.  No running was done & The Beaches were a very different place to now. With the strong winds I don’t think I could have run along the waterfront even if I’d wanted to!

One word. Beautiful. The run gave me a smile. 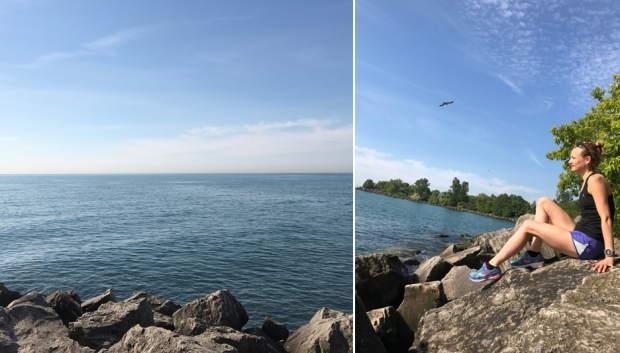 Primarily I was in Toronto to work – Friday I was shooting a wedding so Saturday’s plan was another easy run. I always struggle the day after a wedding, legs are heavy, I’m tired & running is usually just hard work. Ummmmm three miles became ten at 8:10 pace! I was simply LOVING it! I went exploring, the sunshine & views distracted me from any tiredness & discomfort & I just ran wanting to take in more & more, chasing better views, more photos & eventually shade & water (operational fail…). I’d seen a photo of the Toronto skyline on Instagram taken from Tommy Thompson Park. Looking at a map I realised it wasn’t too far from my brothers place. I wanted that skyline. I found it & some small trails to boot! (Toronto does seem to be more about road running than trail).

A major bonus I discovered in Toronto were drinking water fountains. I hardly ever see them in London but there were a lot throughout Toronto. It was a godsend on this run when I didn’t carry water because I was only planning three miles…! 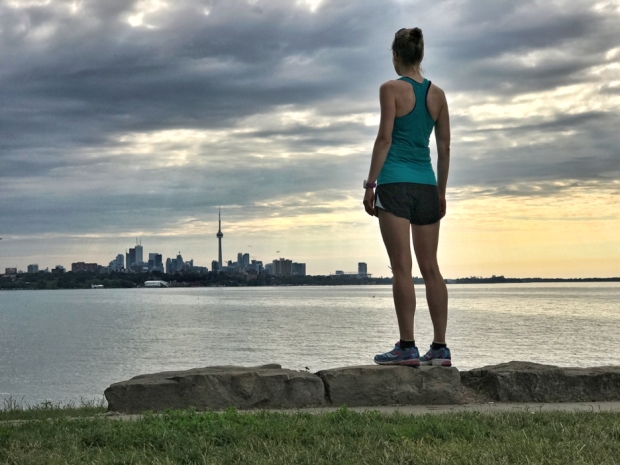 Starting at the beginning of the boardwalk in the Beaches to the east of the city I headed off as the sun rose behind me. I had ambitions to run across the city to the beaches on the west. Music on, I eased into a steady pace, feeling the early morning sun on my back, the softness of the sand spilling onto the boardwalk beneath my feet, I felt good. Through the beaches, across Woodbine Spit I hit the harbour, the city scape & iconic CN Tower creeping ever closer. 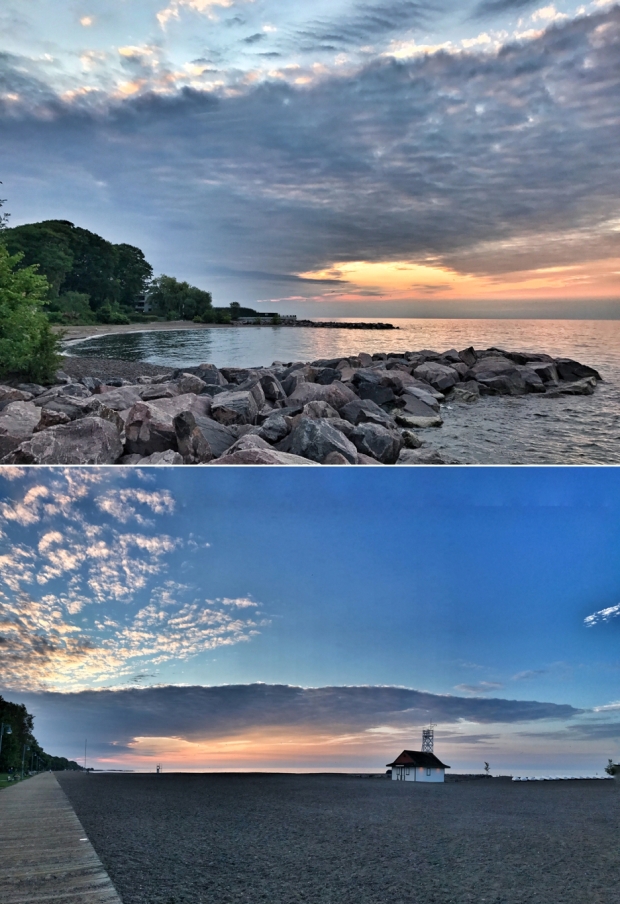 Feet in a rhythm I was knocking out 8:30 min miles with what felt like ease. The edge of Downtown, I paused at the beginning of Younge Street, stretching for 1,896 km from Toronto’s waterfront to Rainy River, the worlds longest road. Downtown was familiar, the places I’d walked & hung out at on previous visits. 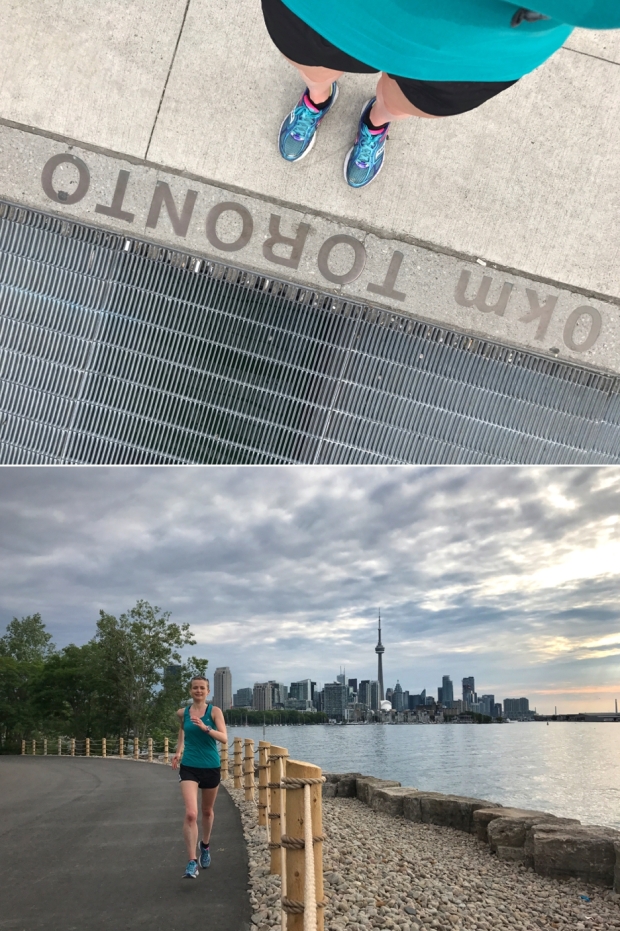 The CN Tower, Rogers Centre & suddenly the city scape was behind me.

Running with Lakeshore Bulevarde on the right & Lake Ontario on the left, the Waterfront Trail was busy with runners & cyclists. With a smoothness not seen in London, cars gave way to cyclists, cyclists to runners. With no haste or beeping of horns, cars would wait patiently for me to pass before turning into side streets. It took me a while to get used to the politeness of other path & road users so used am I to the rudeness of London!

Leaving the city behind me I was still feeling good. The paths now vaguely familiar from the marathon some three years earlier. 14 miles I made it to the Humber River crossing. My turn around point. I paused for ten minutes, sat, had a snack, a drink, took in the view of the city, now tiny in the distance. Smiling, I was happy.

But I saved the best run to last! 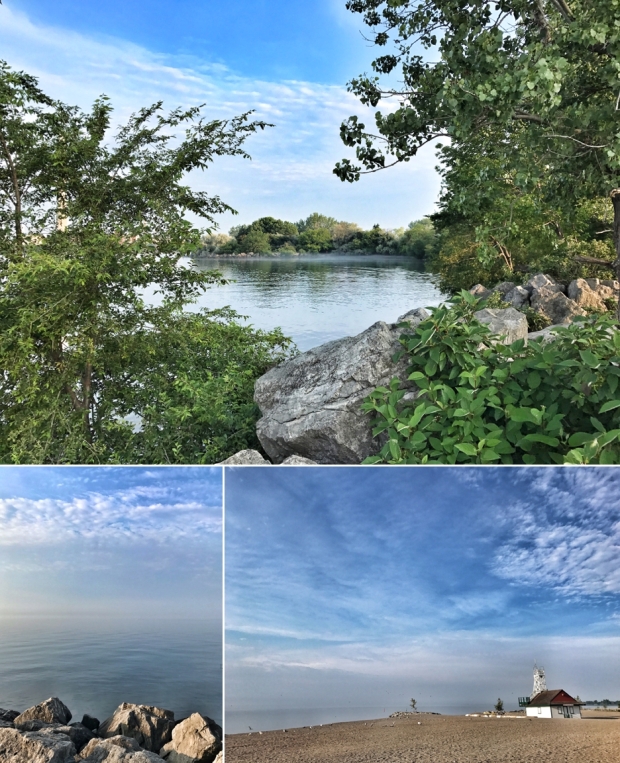 If the main reason for my trip to Toronto was work, the second reason, and the reason for the extended stay was to spend time with my brother, sister-in-law & nieces. Lola, nearly seven said she wanted to some running with me! So on my last morning, after I’d done an easy six farewell circuit of the Woodbine Spit I went to collect her. 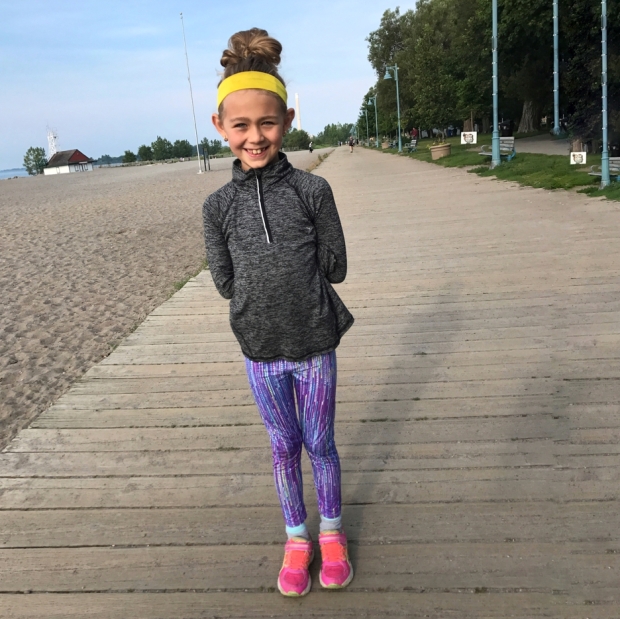 She was sitting waiting, on the porch. Running pants & top on. Wearing her sneakers, hair in a bun, bottle of water at the ready! We walked to the boardwalk to warm up, took a quick selfie (had to be done!) & decided we’d see if we could make it to the end of the path. I knew it wasn’t far but in typical childlike manner Lola sprinted off. We did a 100 meters or so then took a walking break. This carried on & we made it the half mile to the end! A little rest & we decided we could make it back again. We raced to the lamp post – she beat me. We walked to the next sign post, tiring we decided to go just a little further. We hit a mile! 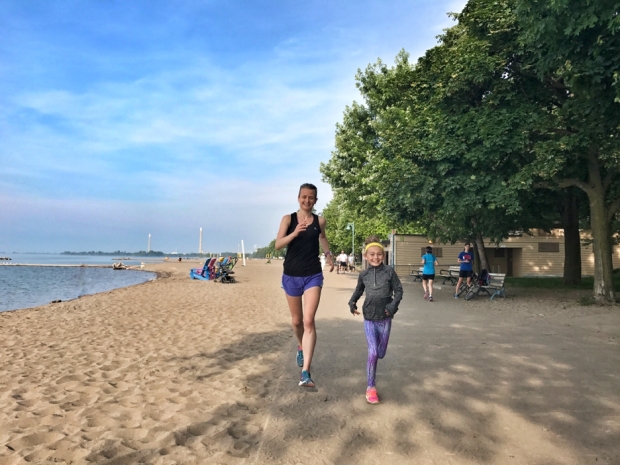 Lola’s first ever run, For me, it was a really special time with my niece & I loved introducing her to running. Whether she runs again or not, who knows but I hope that she remembers it with the same fondness that I do.

And of course, all significant runs finish with cake!

So that was it Toronto in running. 44 miles, some amazing memories.