When it’s the hottest day of the year so far what’s the best thing to do…? I’d like to say 22 miles on the NDW & whilst I enjoyed it, 30+ degrees was just a little too warm!

At 6:30am I jumped on the first train outta Norwood Junction that headed to towards the Downs. Arriving in Caterham at 7:01 I hot footed it up the A22 to the Caterham Viewpoint, or as I now like to refer to it ‘Mile 38’. I walked rather than ran to my start line to stretch my legs a little, my right quad was feeling a bit tight & I wanted to stretch it out before I started running.

The obligatory photo of the view, a quick tweet & I was off. The half mile from the view point to the A22 crossing is the woodland trail that I like. I ran thinking of the last time I was on the section of the Downs. I ran this section with Claire, much needed company at a time that I was beginning to struggle a little. Today I just had the company of Martin Yelling & Tom Williams & the excellent Marathon Talk podcast.

I’d been looking forward to this run for a while. We’re hitting peak wedding season when life as a wedding photographer becomes somewhat chaotic & my running time is valuable down time. With a wedding shoot on the Saturday & working on the Sunday I decided to take some time off Monday morning, after all, what is the point of being your own boss if you can’t do that!

At 7:30am it was already hot & I knew it was just going to get hotter. I ran the first few miles ‘hardish’ knowing that the later it got, the harder simply moving would become. 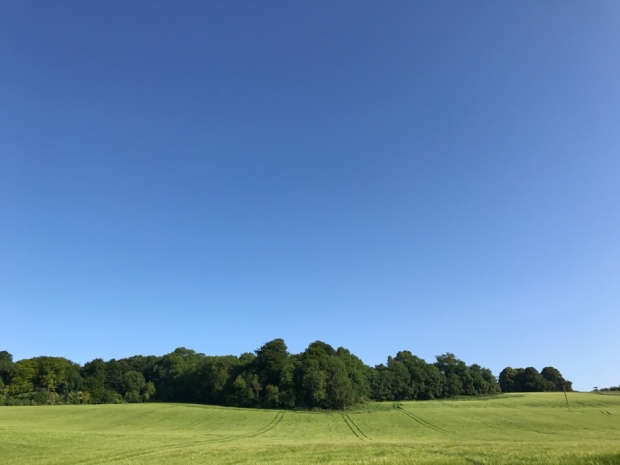 Not a cloud in the sky, the first 12 miles were on familiar territory. The route might be familiar but one of the things I’m loving about trail running is that even the most familiar route is different from week to week, month to month. The first time I ran to Oxted Downs in late December there was three foot of mud & fog so thick I couldn’t see more than 20 metres in front of me. My reece run 10 days before the NDW50 saw clear skies, budding fields & greenery beginning to sprout. 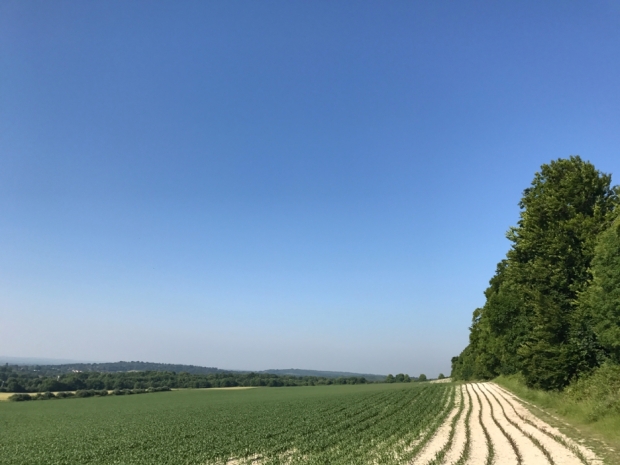 Today, summer was in full swing.

The sky was clear & blue, the sun bright, I could see for miles.

The ground, dry, hard, cracked & starved of water was the complete opposite to that first exploration six months earlier & made for a very different surface to run on.

The trees in full bloom provided some much needed shade.

Corn, blowing in the breeze in the fields not far off being harvested.

The trails at point so overgrown I was fighting with brambles to make my way through (I give ZF’s that as long as I run trails I am never going to have pretty girl legs).

Some of the trails was so overgrown I could barely make my way through!

The same path, the same trail, four runs, but each one so very different. You don’t get that running around the street of Croydon.

12 miles, Knockholt Pound. Forever to be known as the finish line. Reminiscing, I crossed the road & stepped onto new ground. Now this was exciting, time to test my navigational skills… Due to the excellent signposting on the NDW, the only time they were really tested was a couple of miles later on, ironically enough, a road section!

Crossing the M25 I made my way through wheat fields (yes, an official path, I had a quiet giggle with myself as only the previous week the Prime Minister had been ridiculed for saying she ran through wheat fields in an act of rebelliousness when she was younger!) & then 15 miles in I spied a shop! I’d drunk well over 1.5 of the 2 litres I’d brought with me & having checked the route beforehand was banking on there being a shop in Otford that I could refill at. On an impulse I grabbed an ice popsicle with my water, GENIUS! Absolutely perfect, cold, sweet & juicy, I shall be now on the hunt for ice-lollies on all my long-runs this summer!

I came out of Otford. Saw the big hill (I’d been warned that morning by Twitter…) & though longingly of the train station I had passed mere meters earlier. This was going to be tough, but as tempting as it was I knew I would kick myself later on if I turned around now. It was hot but I was coping in the heat, I now had plenty of water & knew that there were shaded areas on the trail. When I’ve got my mind set on something I don’t like to give up.

The remaining seven miles were hot & slow, but as always on the NDW full of stunning scenery & things to look at. I do find on long-runs that the tireder I get, the less I notice things & the photos to miles ratio becomes smaller. It becomes more of a mental battle to keep going & I very much felt that today.

By 20 miles my Garmin was frantically telling me it was running out of energy. Me too Garmin, me too… My intended destination was Wrotham, still two miles away.

It’s funny how when you’re tired & low on energy the thought of your destination being mere minutes away can spur you on. Miles 21 & 22 were two of the fastest of the whole run! I arrived in Wrotham, pressed stop on the Garmin with 1% battery left & collapsed in a sweaty heap on a bench near the town centre. 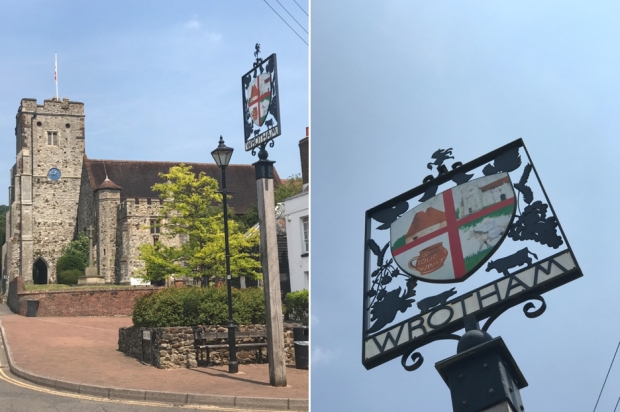 I estimated I had about one percent battery remaining too but I was smiling. Again, I’d done it. A challenge, a new trail, conditions I would usually avoid running in (blonde + blue eyes + fair skin + sunshine = red hot sweaty mess) but I’d done it. It wasn’t a race, it wasn’t even a training run. There was no plan, no agenda. It was a run simply for the love of running, the love of exploring, the love of being outdoors & the love of a challenge.

The next challenge was to make it back to Croydon… I’m great at planning my run routes, not so great at planning how I get home again. Let’s just say, I think it wold have been quicker to run it, and I most definitely was not going to be doing that!

Arriving in Wrotham, I hit miles sixty of the NDW. Not bad going when 12 months ago I’d never set foot on the NDW & in my shame, didn’t actually know of it’s existence!

It’s given me a few ideas for ‘what next’… Stay posted!

Atmospheric would be the word I’d use to describe this evening Striders speed session.
All aboard the struggle bus today! 🙋🏼‍♀️
A wonderful morning wandering Wendover Woods with @nikki_javan & @rel_lindley
I DID IT!!!! 🍾