AKA Insomnia stole my sleep

The start of British summer time, the clocks go forward an hour so we loose an hour’s sleep & insomnia stole the rest… I remembered this about mid-way through when this run started to feel really, really hard. Note to self, a long run after less than two hours sleep is not going to be easy!

Having been lying awake for hours, I jumped on the first London bound train out of Norwood Junction on Sunday morning to find somewhere more exciting than the streets of Croydon for my long-run. I don’t know how I managed to train for a marathon in previous years doing the same old loops round Croydon for almost every session. 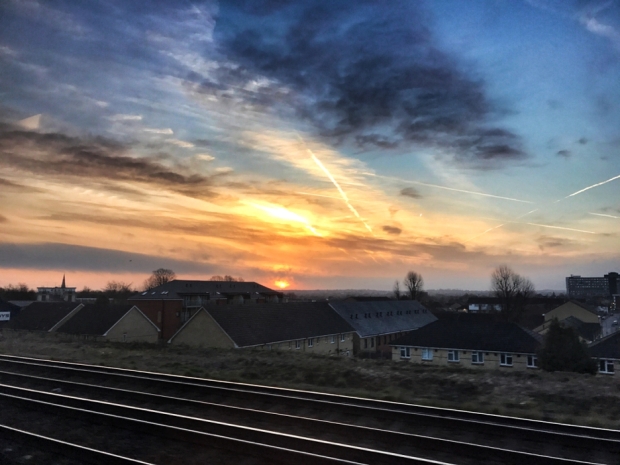 Sunrise from the train window! I was hoping to catch it in town but the first train out of Norwood Junction wasn’t early enough!

I arrived in London Bridge just after sunrise & set off on the familiar route along the Southbank. I know this section of the Thames Path well & having discovered further west during the Thames Meander Marathon few weeks ago I decided to see how far along 18 to 20 miles would get me!

Starting in the heart of the city in the shadow of the Shard I passed many of the tourist attractions of central London. I did think I’d like to document my route but didn’t want to be stopping every few minutes for photos… I wanted to use this run to test consistent pace & had a vague idea of trying to keep it in the region of about 9:20 min/miles. Slower than target race pace but a good LSR pace.

Borough Market, Shakespeare’s Globe, the Tate Modern, St Paul’s across the river, the National Theatre, the London Eye, Westminster. Up to Vauxhall.

I was going a little faster than planned.

A route of extremes as I hit the slightly less salubrious redevelopments in Nine Elms, a quick spin round Battersea Park, past the riverside bar we had our wedding party at eight years ago (!).

Dodging rowers & their boats alongside the river in Putney, the river opened up. Less development, more green. Under the low Hammersmith Bridge, onto paths I knew I’d run two weeks earlier but not yet looking familiar!

Having felt pretty good a few miles earlier, 11/12 miles in I started struggling. That pesky knee was getting sore & my energy levels were dropping at alarming rates. I was battling.

14 miles in I remembered I’d slept for less than two hours so decided to cut myself some slack. I paused the Garmin for a few minutes & wandered down to the edge of the river, stood & looked out across the Thames & gave myself a little bit of a (kind) talking to. I took a moment to appreciate my surroundings, it really was a beautiful morning!

Realising that I was tired & that this was affecting me quite considerably I decided to run each mile & review how I felt, giving myself the option of stopping if I needed. I switched from podcasts to my favourite running playlist – lots of upbeat music – & set off again. 15 miles, I felt ok, 16 miles, Richmond riverside where I’ve spent many an afternoon drinking at the waterfront bars, picked up a little, knee no longer sore, 17, if I can get to 17 then I can definitely get to 18. 18 miles, well it’s only 2 more to 20…

Today I learnt that things out of my control can affect a run. I had prepared well. I’d fuelled the previous night, had a good breakfast, coffee, hydrated, planned my route, chosen my kit & packed fuel for the run. I didn’t plan to lie awake most of the night staring into space… Sadly, as an insomniac I have very little control over my sleep patterns & I do worry about how I will sleep the night & week before the NDW50. And the worry stops me sleeping… It’s a vicious circle.

But, although the run may have been tough, it served it’s purpose. 20 miles in just over three hours with an average pace of 9:03 min/miles. A little faster than I planned. Sub-4 hour pace.

With Brighton Marathon just two weeks away I’m easing off very slightly, although I am not doing a traditional marathon taper as Brighton is obviously not the end goal. Next week’s LSR is a marathon paced 13.1 miles which sounds positively delightful! It’s madness that I think 13 miles doesn’t sound very far!

What else did I do this week? There was a 6 mile recovery run exploring some newly discovered paths in South Norwood Country Park on Monday that should have been 8 miles but was cut short as my knee started hurting.

A knee-pain free 8 mile Striders club run on Wednesday that I have absolutely NO recollection on the route we ran, whether it was hilly or flat or what pace we ran as I spent the WHOLE run talking & chatting to friends & it was wonderful! And finally a 4 mile tempo run on Friday. I pushed the pace a little & it felt good to get a bit of speed back! 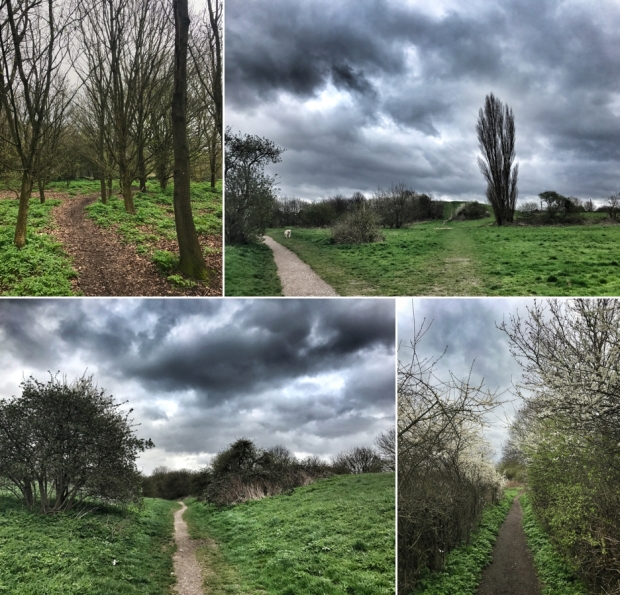