Running by the light of seven torches…

Sometimes it’s fun to do something a little different! On Wednesday evening I dumped the Striders club run around the streets of Croydon in favour of a little off-road exploring by the light of head torches!

I’d been chatting to Gary on twitter for a while & he invited me to join a nighttime group run on Wimbledon common. I somewhat hesitantly accepted the invitation (as a friend pointed out isn’t it a bit weird to be meeting people off t’internet in the middle of a common you don’t know at night for a run…). All was fine and the run was so much fun.

It was a warm & clear night (warm enough for shorts!). At one point we turned off the torches & looked up at the moon & stars. It was amazing how much light they gave off & to be honest if we’d been out in the open we wouldn’t have needed the torches.

The group were all ultra runners, a number had run the NDW50 (& also the 100) so it was really interesting just listening in on their conversations. Have to admit I did feel like the new, inexperienced runner next to them all but I picked up quite a few pieces of advise that I’ll keep in mind for May

Saturday morning I made a slightly hungover late decision to do parkrun. All I can say is that a late night gig & copious amounts of white wine spritzers (note to self, drinking wine in spritzers does not mean you should drink twice as much…) MUST be good running prep as I finished as first lady!

Although fast for me in 23:35, it wasn’t a fast first lady time. I think most of the front runners were racing cross country later in the day as none of the usual 20:xx runners were there. But who cares, I was, I’ll take it!

This was actually an unremarkable run. Interesting to discover an off- road(ish) route back to Croydon from the river but in comparison to earlier club runs it was all a bit dull, drab & uninspiring. The grey & misty weather didn’t help either. Very glad of company & lovely to catch up with a club mates as we ran. 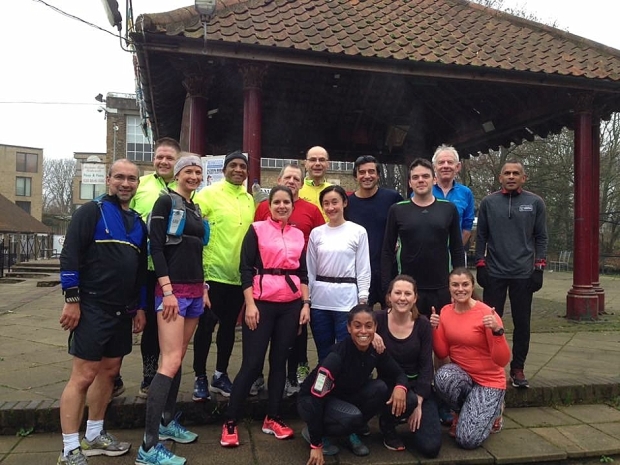 Thanks to a random dude in Merton Abbey Mills for this photo!

This run would also have marked the official start of marathon training. Once my A race, I am still planning on running Brighton but probably more as a training run than as a race. Part of me still looks at the sub-3:45 goal I’d set myself & I’m struggling to let go of it but realise I can’t focus on both the endurance for the 50 miles (which is now my A race) & the speed training that I would need to do for a fast marathon. If I feel come April that running Brighton will hinder my prep for the NDW then I will defer entry.

12 months ago I started marathon training with a lingering injury & a longest run of six miles. A lot has changed in a year. Am hoping this 16 gives me a good base to build up to 50 miles from when my ultra training starts officially in a couple of weeks time.

Nest week is going to be one last easy week before the serious training starts!