So this was, if you like, my first NDW training race. Oh. What have I let myself in for…

Three Molehills, aka ‘three massive hills’. It’s a race with a difference. Teams of three compete over the three hills in the Mole Valley: Box Hill, Norbury Park & Ranmore, starting & finishing at Denbies vineyard. Each team member picks a hill to run. Or, if you’re crazy you run the whole thing as an individual… Uh huh… Yep. crazy here… 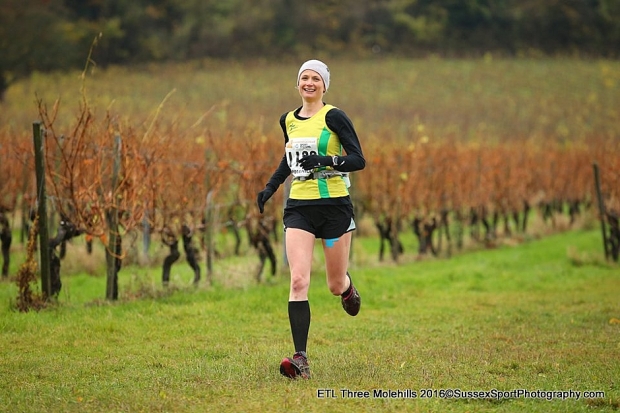 Striders had four relay teams running so there was a good crowd of us on the start line. Chatting to a guy from Tadworth Runners he commented on how many yellow vests there were. I mentioned I was the only foolish one, he challenged me to try & beat one of the relay teams… Well ok then. You know I like a challenge…

Started nice & flat, the leg one Striders sped off into the distance as I rocked a 8:03 min mile then hit the steps. 270 of them. Going up. The view at the top, even on a dull grey winter’s morning kind of made it worthwhile though… The turnaround point at the top was Saloman’s Memorial where I’d turned on my little NDW jaunt from the opposite direction a few weeks earlier. It was good to join a little more of the route I’ll be running in May together.

The decent was fast, down the rocky pig track but thankfully not as slippy as some people had warned me it might be. After a 13:27 minute mile on the way up, mile three was 7:50 & mile four another 8:03. This was looking promising.

The longest leg at just over six miles, a mixture of tarmac & trail. And mud. After 12 hours of heavy rain it was MUDDY. And yes, I did jump into a two-foot deep puddle and get very wet feet… About three miles into this leg I overtook a Strider – for the first time in the race there was a Strider behind me… The Tadworth runner’s challenge was now ON!

An out & back on the NDW. I guess I will be running this section next year. I’m hoping we’ll be running in the back (downhill) direction but am fearful it might be out. I don’t want to look. Who puts a 1.5 mile climb at mile ten of a hilly race? (Do NOT tell me about the elevation at mile 40 of the NDW50…)

For the first half a mile or so I thought I may actually manage to beat one of the Striders teams as I’d gone through the handover back at Denbies quite a way in front of David, the last leg two runner. But they’d saved the fastest to last…  After about half a mile John, on lovely fresh, bouncy & springy, legs caught up with me & with a cheery wave ran on past… Damn, lost that challenge.

But that’s ok, I had a brand new challenge.

Every single muscle in them was protesting with every single step. I HURT. This was hard. Even the flat section at the top was hard. The turnaround. Nope, legs still didn’t want to work. Hmmm, could I… roll down the hill to the finish…?

Gradually though as we started the decline & finishing was getting closer putting one foot in front of the other became a little easier. My pace picked up again. I paused to take a photos of the view (I couldn’t not…) & finally the end was in sight. I could hear someone running behind me. My competitive streak kicked in. I was not going to be beaten on the line… Crossed the finish line with a smile in 2:14:36 & in 123rd place. Job done!

My hardest fought medal. A taste of what’s to come in May.

And the Three Molehills as a race? Highly recommend. For all the pain it was fun to run something ‘different’ a race with a little twist. Really well organised, well marked & marshalled route & great communication throughout – even down to tweets advising on footwear the day before the race!

I’d run it again. And yes, probably as an individual again… I’ve got a time to beat now!

And can I just take a moment congratulate the person who organised a Chocolate Fair at Denbies to coincide with the finish of the race. I may have sampled ALL the chocolate…

So week two, there were a couple of other runs including the Wednesday night club run & an easy parkrun on Saturday that took my annual milage over the 1,000 miles mark, whoop whoop! 25 miles for the week with approx. 2,000 ft elevation gain.

Thanks to ©SussexSportsPhoto.com for the official race photography, all other photos ©me